I'll be tracking my changes for the 1.4 update here.

I started out by listing each individual change like I do for every sub-update. However, 1.4 is proving to be such a big update with some sweeping changes that it is impossible to list them all here.

- All orders except the basic activation orders now require a base 2+ to execute. This keeps a bit of tension even if the opponent has run out of disruption tokens. It also gives more disruption possibilities since you now only need to add 2 tokens to degrade the roll to 4+ (still the max)

- Scenarios; The entire scenario section has been reworked to provide for more historically plausible scenarios for the given fleet types. A scenario matrix will be provided to match up the different fleet types with their corresponding selections of scenarios. This will cause surface fleets to get a different type of scenario when facing each other than carrier fleets for instance.

- AA system is being reworked, as well as some changes to air attacks. Main change is that AA-dice have increased as well as the target scores, balancing each other out but granting me way more playroom for the AA values of different ships. Secondly, the way dual purpose weapons are modeled have been changed. The main AA values will now represent the small-caliber AA weapons on the ship while the dual purpose guns provide a lot of additional dice when present. The DP AA values are now shown in the ‘weapon special rules’ column to make sure all AA info is in the same place. Result of the changes are a more dynamic air phase and much more historical accurate values for AA.

- Air combat has been changed to use the dodge value to determine the save of a flight, instead of the double = kill rule

- Changed the damage rule for carriers. Adding +1 damage for 'accurate' weapons and plunging fire has been changed to giving 'accurate' weapons a better target score vs carriers. This change is because of the changes to the scenario's, pitting carrier fleets against each other in a different, more historical way. The damage increase proved to be very unbalancing in these matchups.

- In line with the scenario rework, I've added fleet types to all OoB fleet lists. This will specify if a list is a Battle fleet, Carrier fleet, Support fleet or a Convoy. Some fleet lists have been reshuffled a bit to be balanced for the target scenario's.

- Introduction of carrier fleets. These fleets work in a different way in their scenarios and thus have gotten their own type of fleet lists.

- Loads of tweaks to ship stats as I’ve gotten access to better data about a lot of weapons, aircraft and ships.

- One sweeping change is the increase of all AP values by 1 point. I’m still playtesting this one (feedback appreciated), but it seems that a lot of ships bounce way more shells than can be historically justified.

- The term AP (armor penetration) has been changed to Pwr (Power). This has been done to streamline this stat over the different weapon systems. For surface weapons, it interacts with the armor value. For AA and air combat, it interacts with the Dodge value. This remedies the situation that resulted in the Dmg stat being used for AA to interact with the dodge rating while in surface combat the Dmg stat acts as a multiplier.

- Increased the power rating of bombs from 9 tot 10

- New design of datacards for ships/planes/officers. They are all styled the same way now.

- Restyled the command stations to make room for the placement of the order-token pool and the disruption-token pool. Furthermore added a subtle color coding to distinguish between the different types of advanced orders.

- Added an excel 2003-based fleet builder to help in list-building and to reduce print-costs. This is an addition to the regular data-cards, not a replacement. 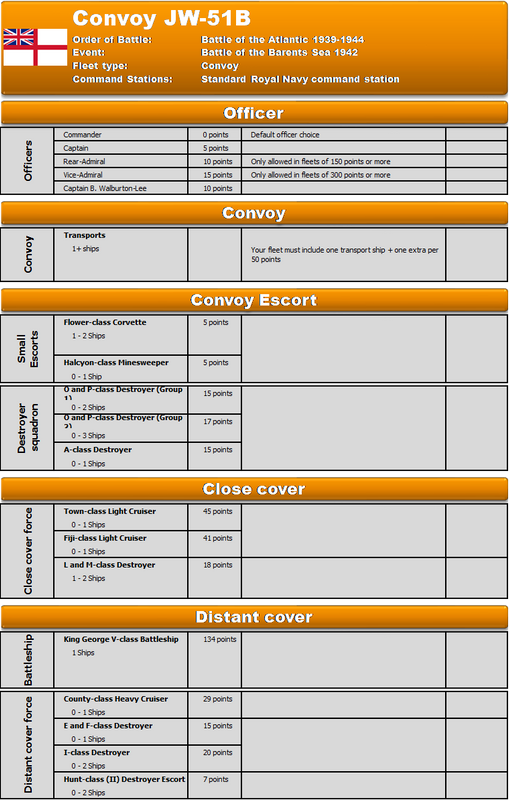 Mind that these files keep getting active changes when feedback is received.
Game designer

"That which hath been is now; and that which is to be hath already been;" -Ecclesiastes-
Last edit: 4 years 4 months ago by Naval War HQ.
The following user(s) said Thank You: Bezmozgu

Added some more changes. I'm also working on a MS Excel app using VBA Macro's to enable players to quickly put together a printable list of ship data to be used instead of the regular data-cards.

I've found that during testing, keeping track of changes and having to reprint my data-cards more than a dozen times gets a bit annoying at some point. So I've constructed this little interface and figured that our members might enjoy having the same option instead of using the high-quality datacards.

Some images of the app and output. If anyone is interesting in testing the app, you can reply here, I'll contact you via the e-mail in your account.
Input interface:

"That which hath been is now; and that which is to be hath already been;" -Ecclesiastes-
Last edit: 5 years 3 months ago by Naval War HQ.
The following user(s) said Thank You: Bezmozgu

Looks good. I'd be interested in having a go, always nice to play around with force building.
There seems to be a little hickup with the armament of the DD's in your sample? The bow guns have range 2, and the centre guns are all blank?


Well, thank you, that second one was a nasty bug to squash, both are fixed now. I'll contact you via e-mail today once I've repackaged the whole thing.

I'm happy to test this -- it looks great.

I would be glad to test the configuaration and make suggestion.

I've sent the test files to both of you, thanks for helping!

Some of the early questions I have:
- Does the fleetbuilder work when you just extract the two files in the
same folder? YES

- Do the buttons work as intended? Does the VBA functionality work at
all? (remember to enable macro's in the worksheet) YES

- Do you get an output file when you generate your fleet roster? YES, works correctly on the latest Excel version.

- Are all stats shown correctly? Mind that I've sent my current database
with the files, so all changes as listed in the 1.3.7 worklist are
worked into the database. This will result in different point values
than shown in the current OoB's for a lot of ships.
HAVE NOT CHECKED THIS AND WILL HAVE TO DOWN LOAD THE NAVYPEDIA TO VERIFY AND WILL DO SO TODAY.
- Are the security settings working on the Database file? You should not
be able to access any sheet in there exept for the first description
sheet. YES, COULD NOT GET THROUGH SECURITY TO VERIFY THE DATA IS CORRECT IN THE OUTPUT SHEETS

),
or any suggestions about the Fleetbuilder interface, that is very much
appreciated.
I WOULD LIKE TO CREATE A WW1 DATBASE AS WELL

Great! Don't bother checking the correctness of the stats with the Navypedia, I meant to ask if the data shown on the roster is the data that you would expect, ie. ranges where ranges would be, torpedoes where torpedoes would be, name, nationality, etc.

So far so good then, let's see how the others have fared. Thanks for testing!