One of the central aspect of a naval game is of course combat. Combat in Naval War can be either surface-to-surface, air-to-surface (of vice versa), air-to air or subsurface. All of these combat variants, except air-to-air combat, use the same mechanics. This keeps it easy to handle and reduces the amount of rules needed to describe this part of the game. 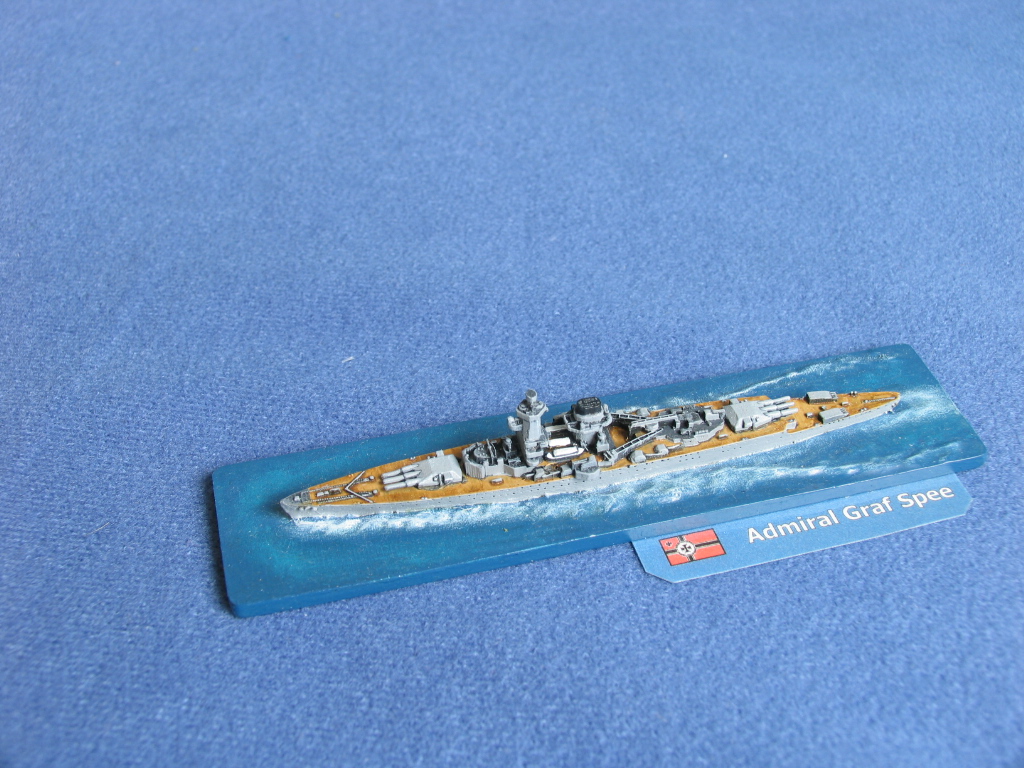 Lets start on surface combat; the core design philosophy here is “to keep it simple”. In this article we follow the Pocket Battleship Admiral Graf Spee in its historic encounter with the HMS Exeter.

As both opponents have closed to within shooting distance of each other the German player uses an order token to play a basic attack activation from his command station.

An attack activation can be divided in 3 steps:
1. Determine target, distance to target and arcs of fire
In this case, the Exeter is a legal target since it is not obscured by any terrain and is within the max distance the Graf Spee’s 11” guns can reach (90cm). Exeter is determined to be at 80cm range and within the broadside arc of the Graf Spee’s guns, which means it can fire with both its front and rear guns. 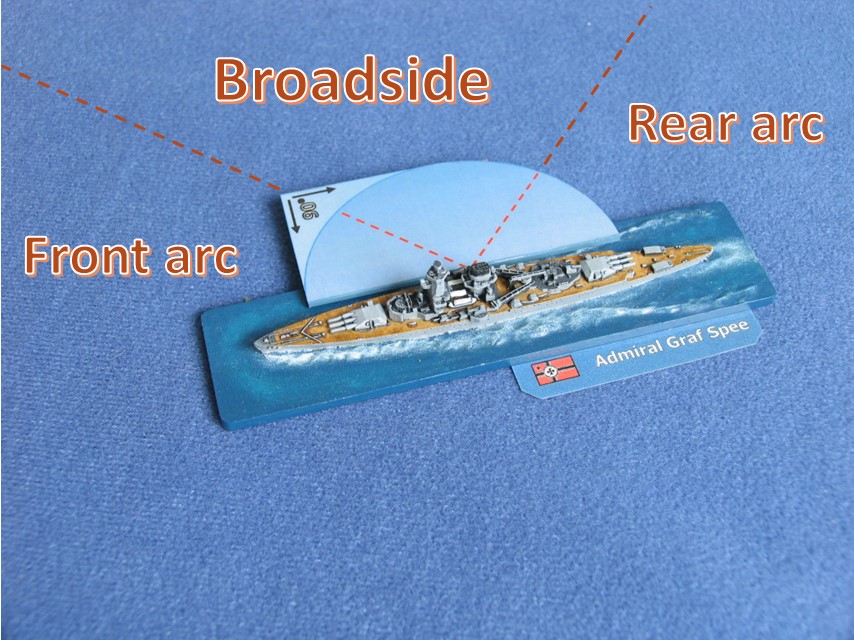 In NavalWar, all weapon systems of the same kind are condensed into a front, center and rear weapon system. This saves playtime, as instead of keeping track of each single turret you get a single value for front, center or rear and also saves a lot of space on the Data cards. In the game, it is only relevant in which arc of fire the enemy ship is sailing, either front (use only front systems), rear (use only rear systems) or center (add front, center and rear systems for a full broadside). 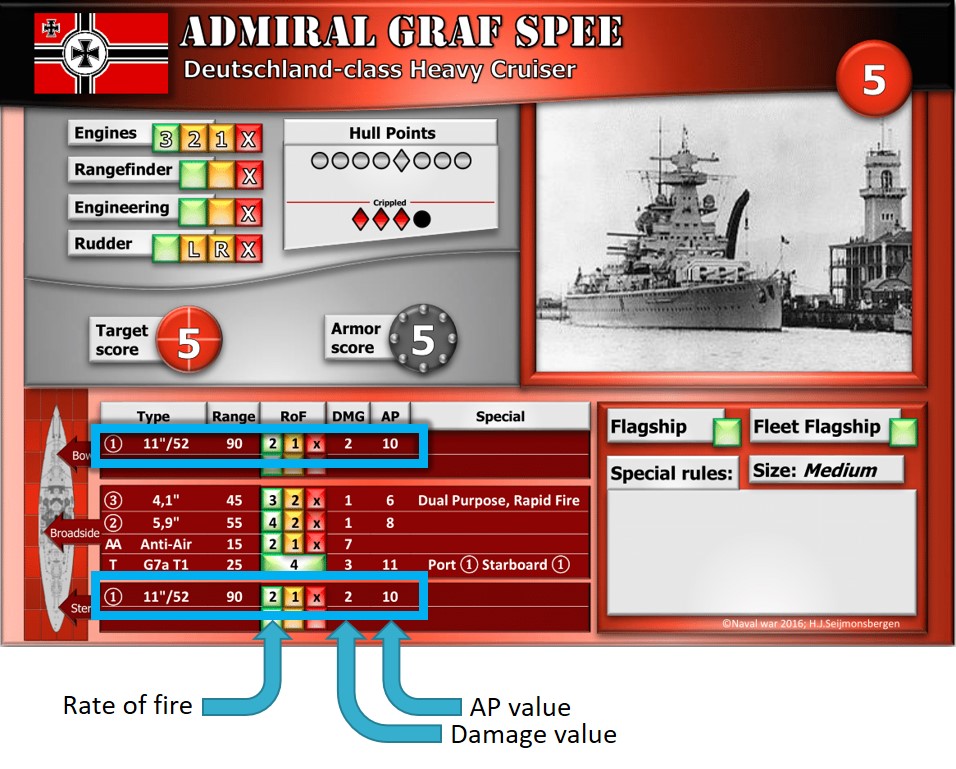 2. Fire away!
To know how many dice can be rolled for this attack we consult the Graf Spee’s Datacard. On it we can see that, when undamaged, both the front and the rear guns of the ship have an undamaged Rate of Fire (RoF) of 2.

In 1.3, the RoF value is based on a modifier for the actual rate of fire (ranging from 0.5 to 1.0) times the actual barrels. With a real-life rate of fire of 2.5 shells per minute, the Graf Spee’s guns have a modifier of 0.7 on her RoF value which gives her 3-gun turrets a RoF value of 2.

So under normal circumstances, because it is able to fire a full broadside, Graf Spee would roll 4 dice. Still, range finding in World War Two wasn’t as advanced as it is today, radar being in its infancy, and ships could take quite a while to find the range on their opponents. In Naval War, this is modeled by the ‘Ranging shots’ rule which says that, unless you have a ‘rapid fire’ weapon, all RoF values are halved until the range is found.

Now, having determined that the Graf Spee can roll 2 dice because it hasn’t found the range yet, what do we need to roll to hit the Exeter? The Exeter data cards shows that Exeter has a target score of 5, under perfect circumstances, this would mean that a 5+ roll on a D6 would suffice to place a hit. Target scores can be modified by a few causes, but to keep the game flowing, the list of modifiers has been kept at an absolute minimum.
Target score modifiers:
- Target is stationary (-1)
- Target is at short range (less than 20cm) (-1)
- Target is at extreme range (more than 60cm) (+1)
- Target is in cover, performing evasive maneuvers or attacker has a damaged rangefinder (halve hits, rounding up)

So, with the Exeter being at extreme range, its target score is raised by one to six. 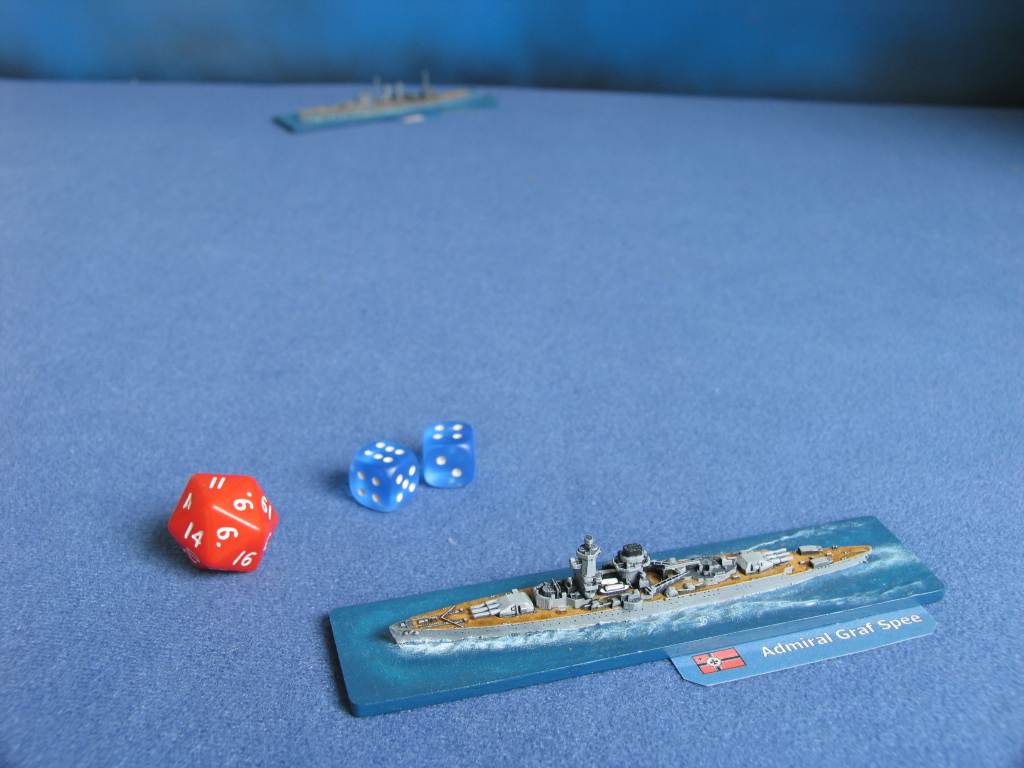 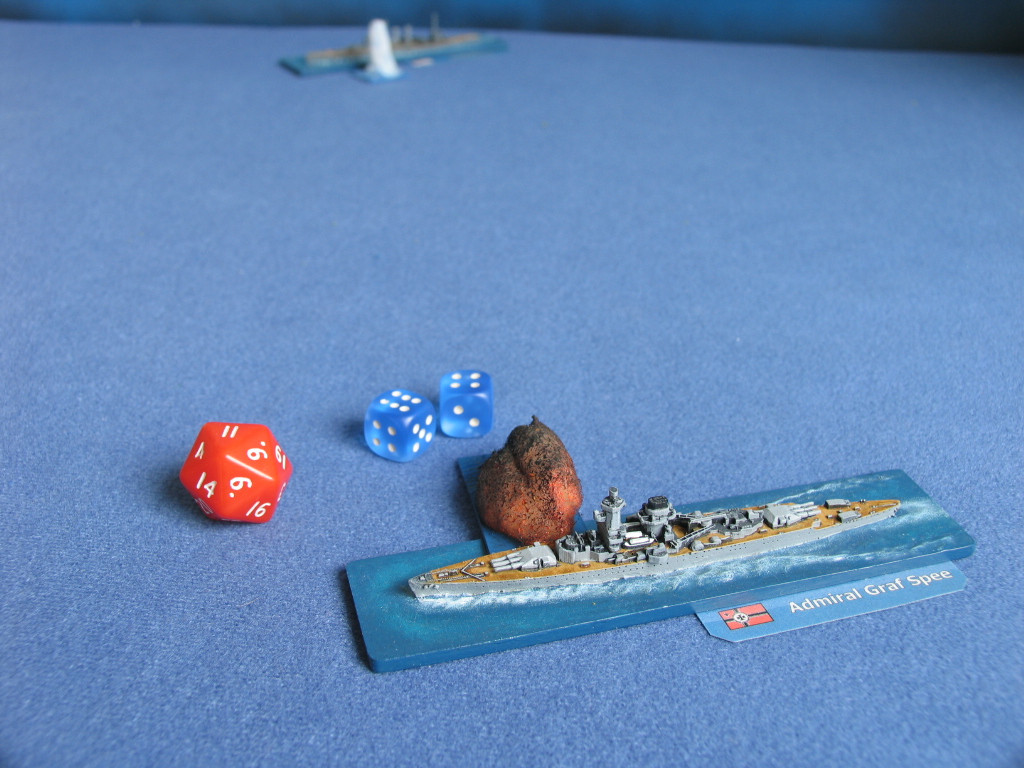 The attacker rolls his dice and determines that he has scored one hit! Since a hit is scored, a blast marker and a splash marker (in this case both labeled "A" to recognise the attacker and the target) are placed to show that the ship is ranged in. Next turn the Graf Spee is allowed to shoot at its full Rate of Fire.

Notice the red hit location die, which we will get to in the next stage:

3. Determine damage
To cause damage, a hit must be able to penetrate the armor of the opposing ship or at lease cause enough damage to other parts of the ship to influence its combat capability. There are three factors influencing this aspect: The hit location roll, the damage rating of the weapon system firing and the armor rating of the ship.
First check the hit location on the hit location chart. Which part of the ship you’ve hit has a big influence on your opponent’s armor roll. If you hit the superstructure for instance, the armor rating becomes less important as all 1’s and 2’s rolled for armor are automatically failed. Hitting different parts of the ship has different effects on the armor roll, so it is important to check this first. In this case, Graf Spee has rolled a 11, representing a hit at- or below the waterline. Since the armored belt is usually in this place, no modifiers to the armor rolls are applied.

Note that every round of firing only hits one hit location. This is of course an abstraction because in real life a salvo of shells could hit multiple parts of the ship (although many of the historic significant hits were single shell hits, think of the hit in Bismarck’s fuel storage, the hit in Graf Spee’s purification plant and the hit on Scharnhorst’s radar equipment). This is a deliberate design choice as keeping the speed in the game was preferable to getting bogged down in minutiae of multiple hit location rolls and separate armor rolls and effects for each hit location.

The next thing to check is the damage rating of the 11” guns. On the data card we see that the DMG value is 2, meaning that each hit will cause two armor rolls, each able to cause 1 damage to the enemy ship. Since Graf Spee scored 1 hit, the Exeter needs to make two armor rolls. The rest is simple. The Exeter has an armor rating of 5, which it may add to each armor roll. Both dice are rolled, scoring a ‘3’ and a ‘5’. Adding the armor rating makes this an 8 and a 10. The AP rating of the 11” guns is 10. Exeter needs to equal or beat this score to prevent damage. One armor roll is failed, resulting in one damage, and consulting the hit location chart shows us that a 1 damage waterline hit causes the additional effect of 1 flooding token. 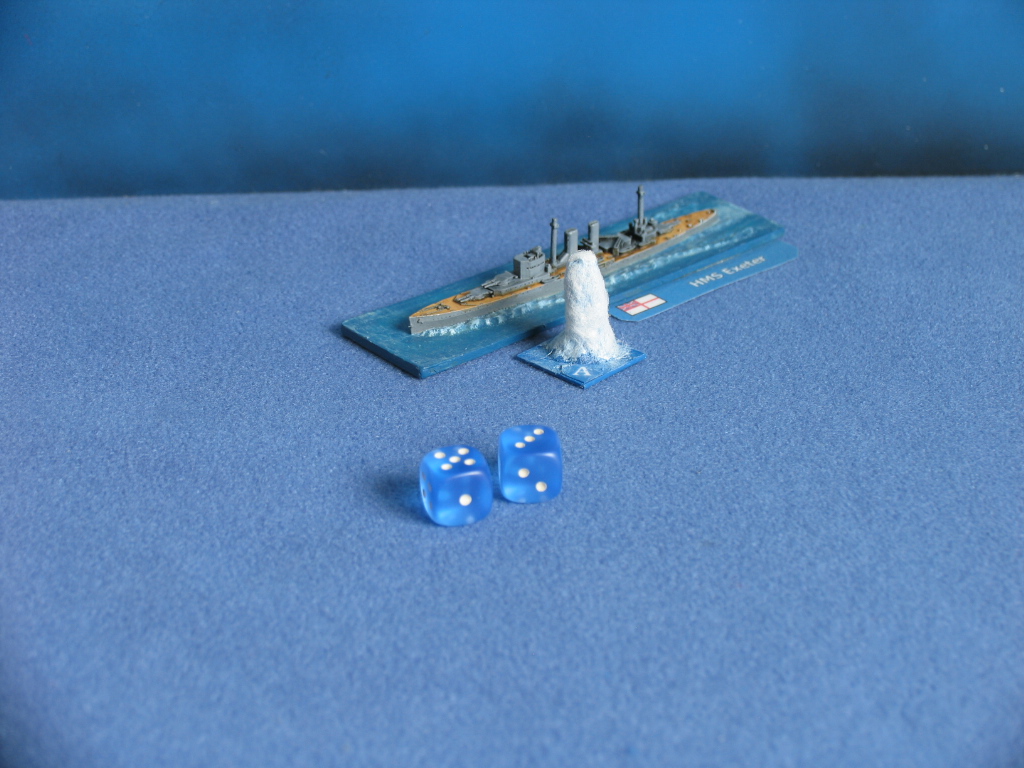 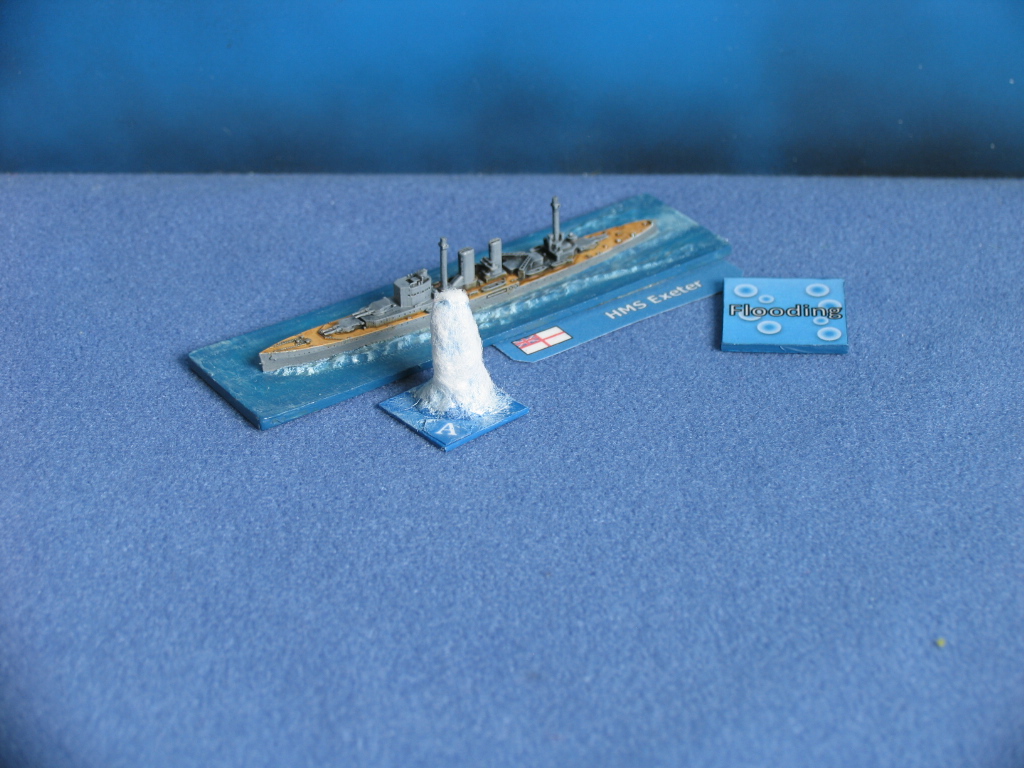 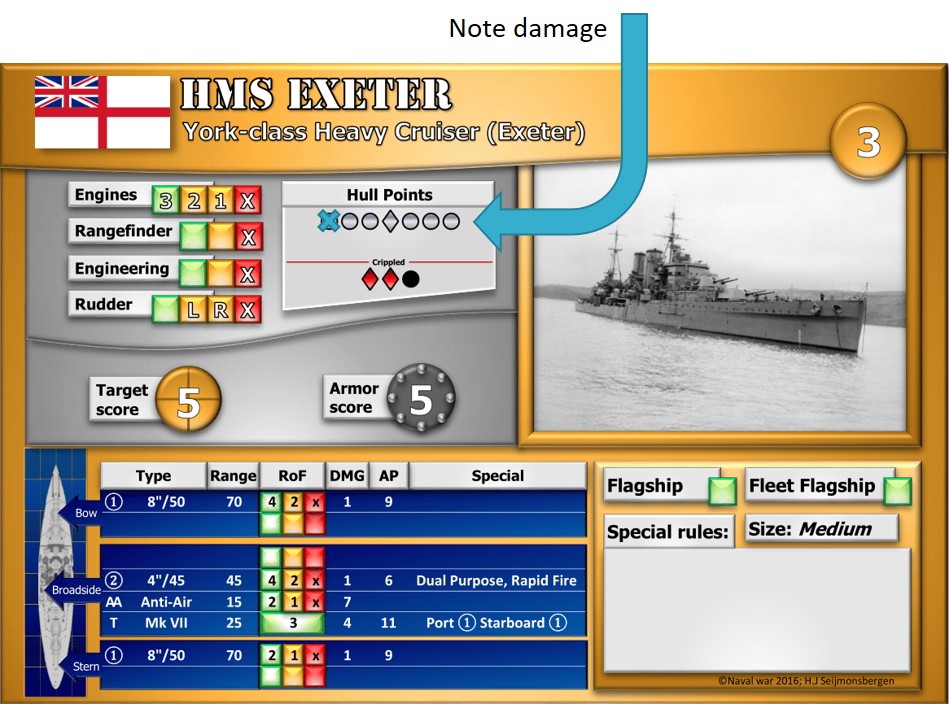 Although it may take quite a few words to describe the whole process, it actually boils down to two rolls. The attacker rolls to hit + damage location and the defender then makes the required armor rolls. In practice, this means that making a surface attack in the game can be handled in a few seconds, speeding up gameplay tremendously.